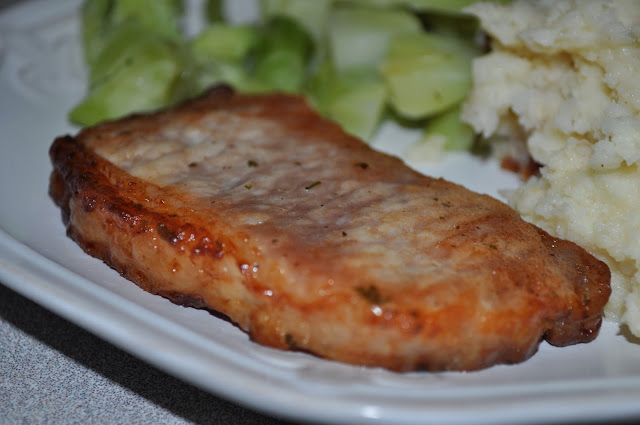 I have this weird thing about pork chops. The name creeps me out a little bit. So much so that I wouldn't eat them growing up. It's not really anything I can explain, but it is very real. And very stupid, apparently.

My deep love for pork came when I made crock pot pork tenderloin sometime last year. I was finished. Caput. Done for. It was the most flavorful perfect meat that had ever crossed my lips. So I began my lifelong (or more like 20-minute) search for an equally perfect pork recipe.

A memory came flashing back to me. "I like pork chops." Tim had said that, like, when we first got married. And I had pushed it in that "Ignore" compartment in the back of my brain. I didn't like pork. But we already tackled that.

Now, I used the small, boneless pork chops, which require less cooking time than the big chunk-o-monks that you can also buy. Going back, I wish I had bought the large ones, but what can I say? I'm new to pork. We're just getting to know each other, and I'm trying to take it slow. I don't want to mess this thing up, as my pal Hillary Scott would sing.

But I can tell you this much-I can see things getting very, very serious between us.

Directions:
Serve this with garlic red mashed potatoes and green beans. That's the start to a beautiful relationship.
Love and chops,