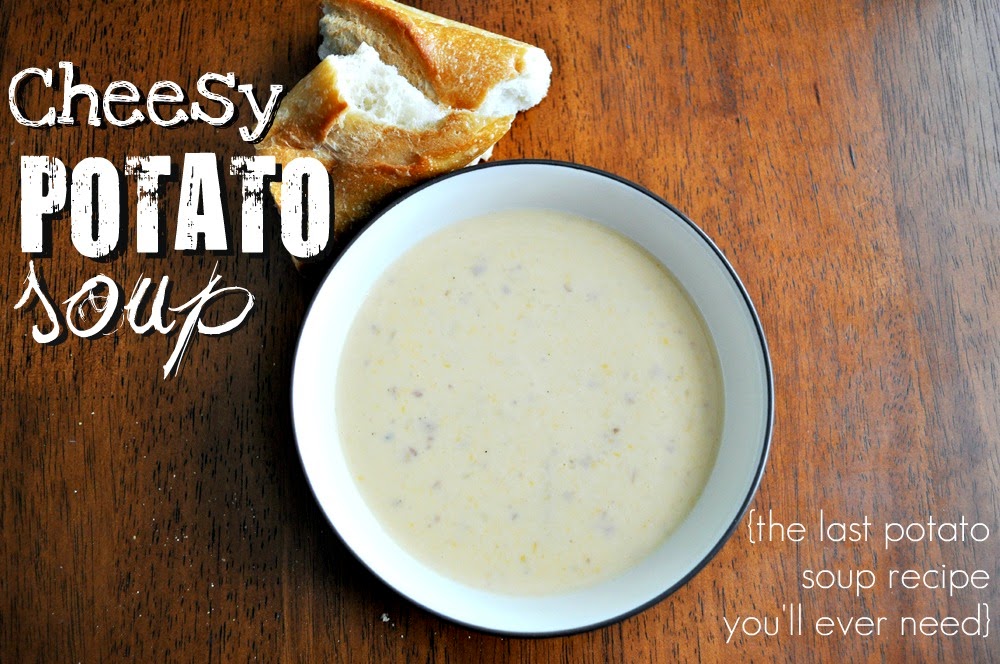 I've noticed something about southern ladies. Correct me if I'm wrong, but they collect things. Those things are normally monogrammed, but there's a lot of pride in having a large collection of something. In fact, the special lady I'm going to be writing about today collects water bottles. So, I was thinking about what I can collect to fit in more adequately with all these southern belles that surround me. And it came to me.

I collect potato soup recipes. No, wait...I am a woman of many soups. That sounds so much better. 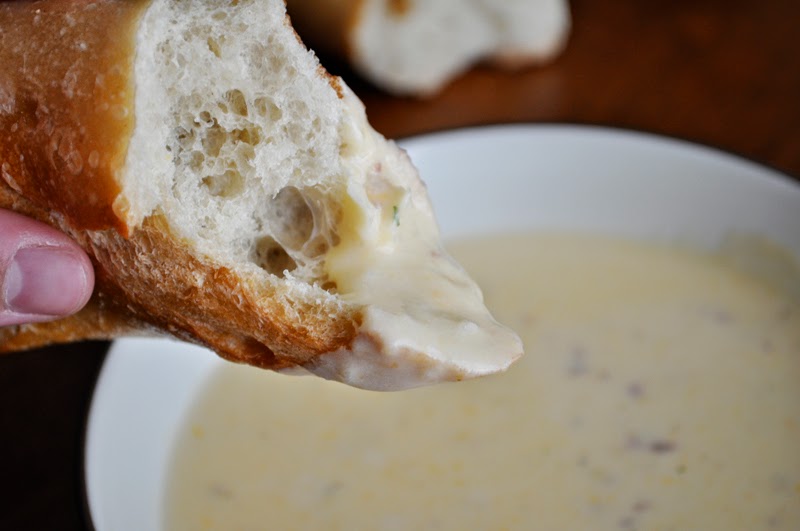 I'm not sure if this is something I should brag about. I should probably choose something daintier, like heirloom tea cups, or totes with my initials monogrammed on them.

Anything but potato soup.

But let's face it...when you post your 7th potato soup recipe on your food blog, it can either be embarrassing or, if you market it right, it can be your "thing." 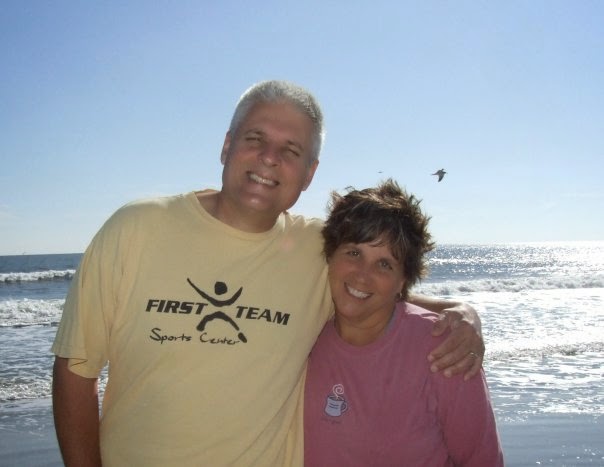 Anyway, I want to talk about the Schlarbs. I love these people. These are good people. There's a lot of history there. I'll try to explain as efficiently as possible:

Tim grew up in Greenville where the Schlarbs live and he became best friends with their oldest son Dave and slowly-but-surely Tim started practically living over at the Schlarbs house because she has five sons and is still amazingly cool and laid back and he slept on their couch and ate all their food and played ding-dong-ditch on them in the middle of the night and Mr. Schlarb nearly killed him for it and I essentially owe Tim's life to Terri Schlarbs parenting skills so then when Tim and I moved to Greenville after getting married Terri said they had a job at her office so I took it and she listens to all my problems and pretends to care and Mr. Schlarb brings us treaty-weaty's which means TCBY and she plays with my son and lifts weights with Tim and now I love her and I think she loves me more than Tim but don't expect her to admit it.

That's about it. Oh, and she collects water bottles. But I already mentioned that. And, she makes the best potato soup ever. Which is what brings us here today. It's so good, I almost deleted my other six potato soup recipes because I was embarrassed. And because this is so clearly the easiest potato soup of the bunch, I feel confident saying this is the last potato soup recipe you will ever need. 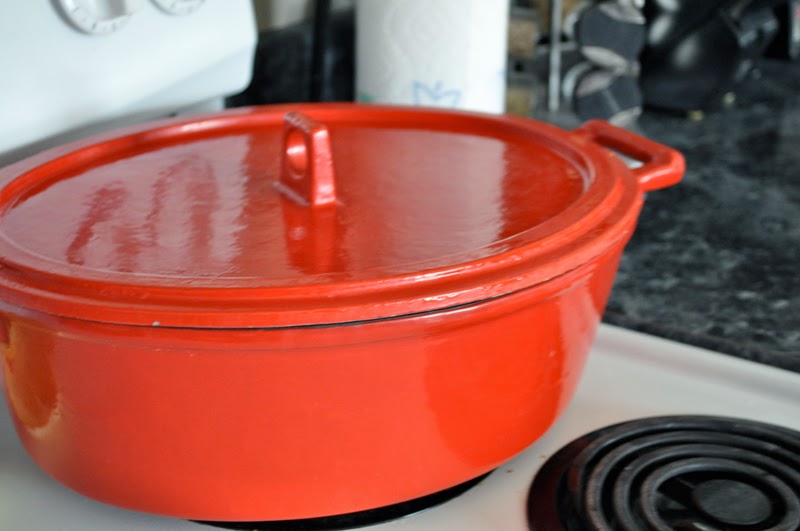 I want to take a second and show off my dutch oven. It belonged to my Grandma Sanders and is one of my absolute favorite kitchen items. You can use a pot, or you can tell your significant other that you have to have this to make the best potato soup in the world. 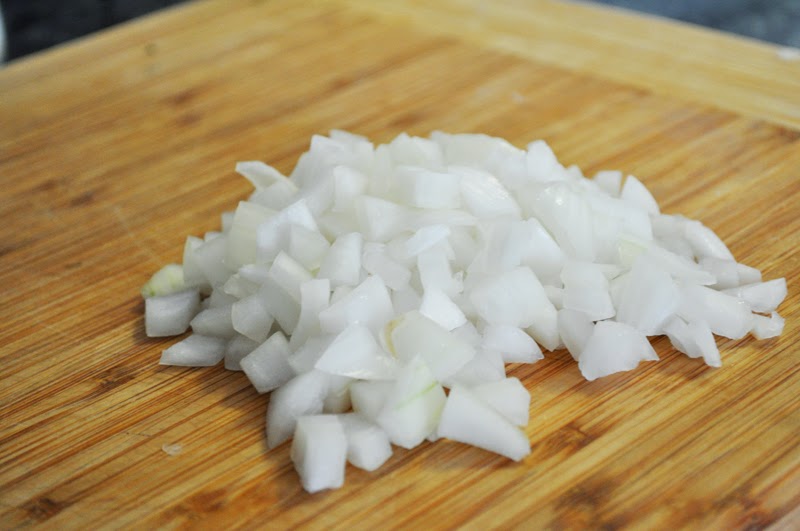 All right, down to business. First, chop up the onion as finely as you are capable of. I don't have much patience, and I value my fingers, so this was my best. 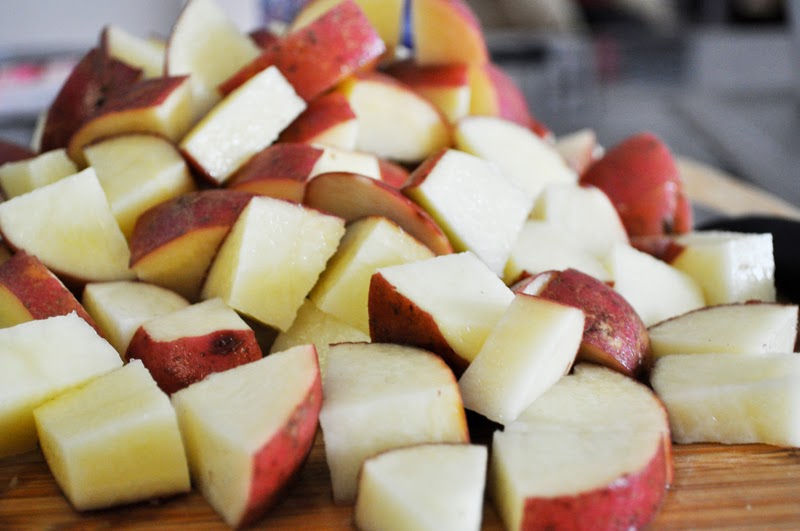 Next, we're going to dice the potatoes, skin and all. If there were any eyes or weird marks on the outside of the potatoes, I went ahead and cut them off. I sliced each potato into eight pieces. 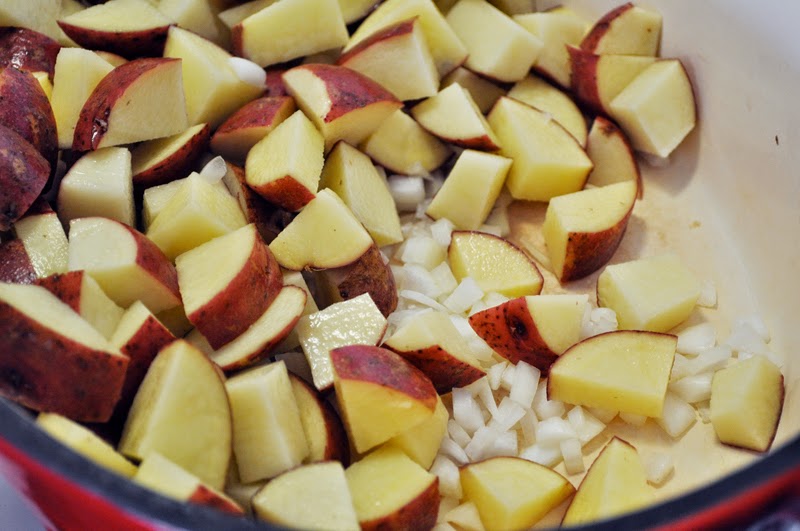 Toss both the onion, potatoes and about a tablespoon of salt into your dutch oven/pot. 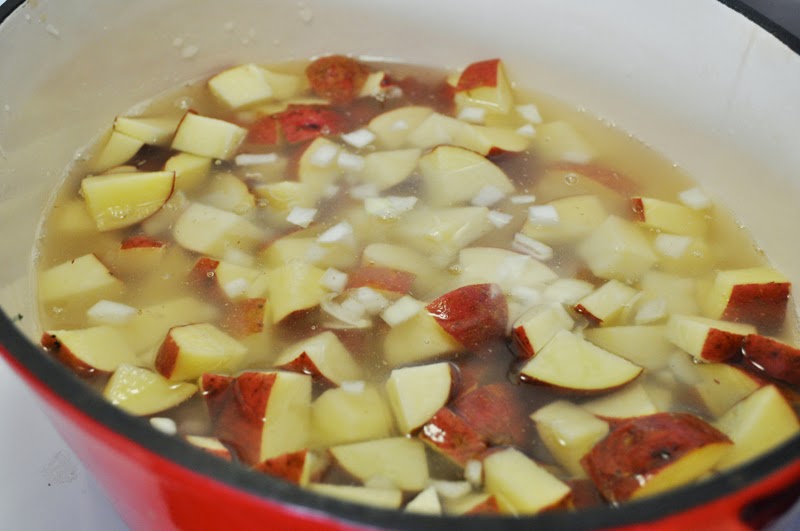 Fill the pot with water until it's just above the potatoes and onions. 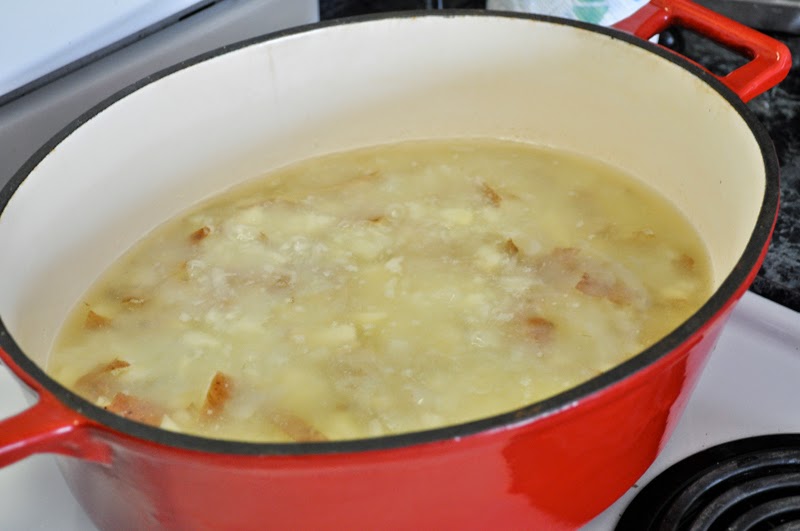 Bring water to a boil then immediately drop the temperature down so it's simmering. Cover and let simmer until the contents are very soft. This takes me about 20-30 minutes.

Once you can easily pierce the potatoes with a fork, use a masher and mash to your heart's content. It doesn't have to be perfectly smooth-we'll do that later. 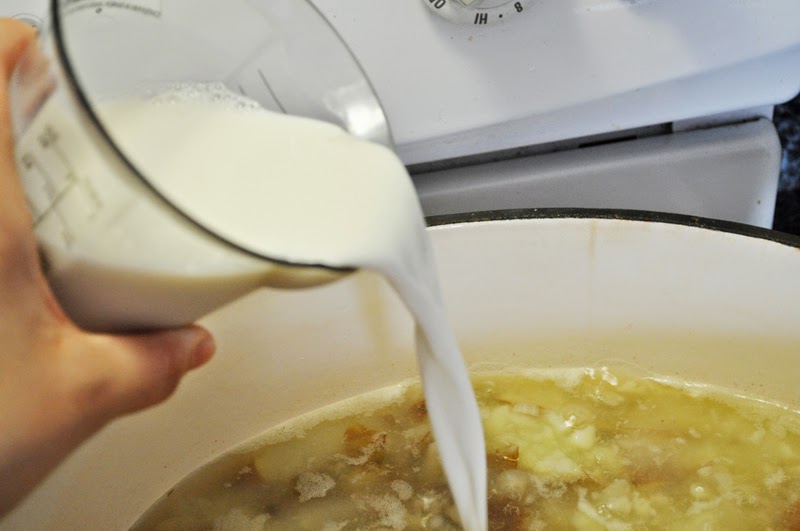 With the heat on low, add the milk. 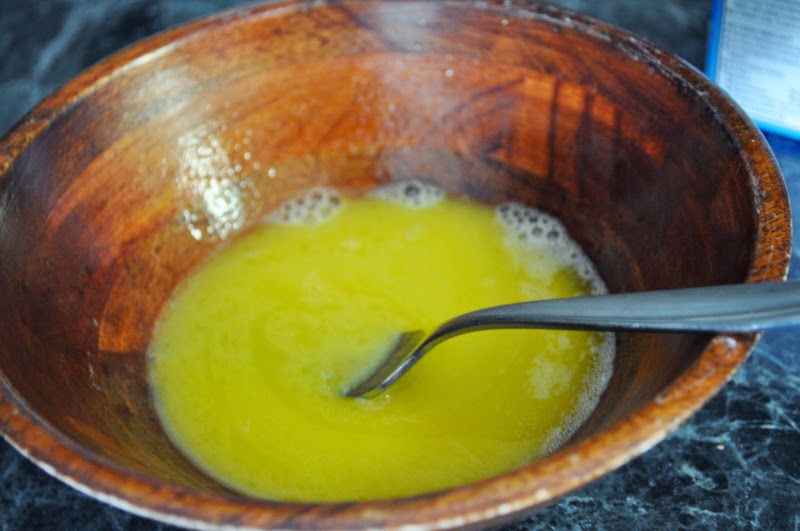 This next step you can do while the potatoes are simmering. Melt the butter. 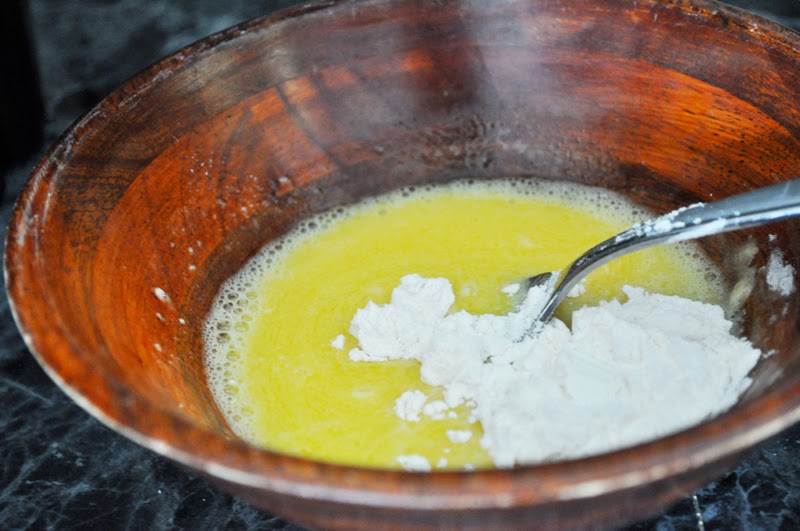 Add the flour and stir well using a fork or whisk until there are no clumps. 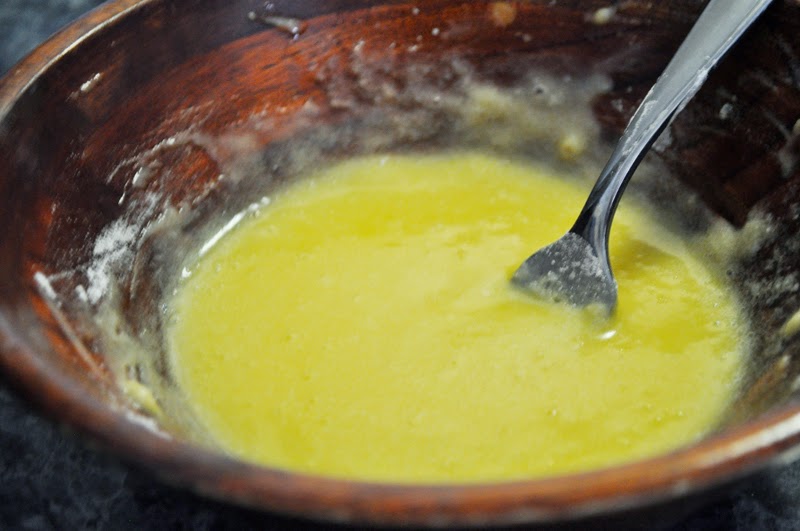 Please don't skip this step. You have to do it to thicken the soup. 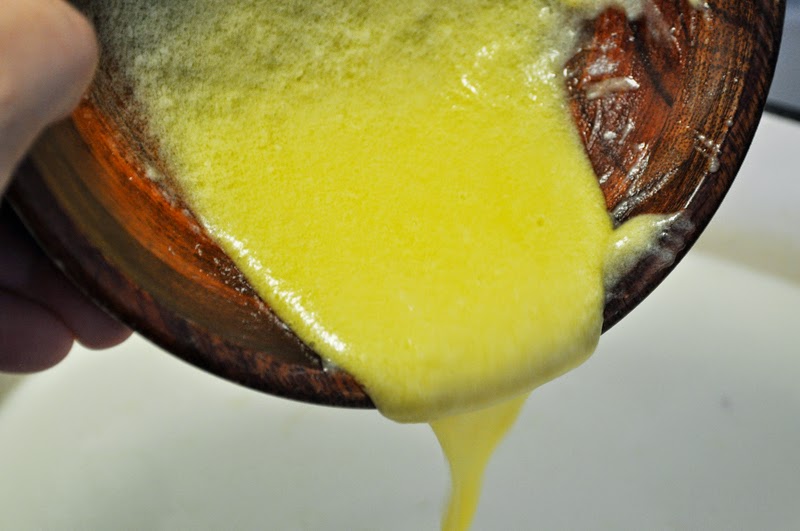 Add to the soup and stir. 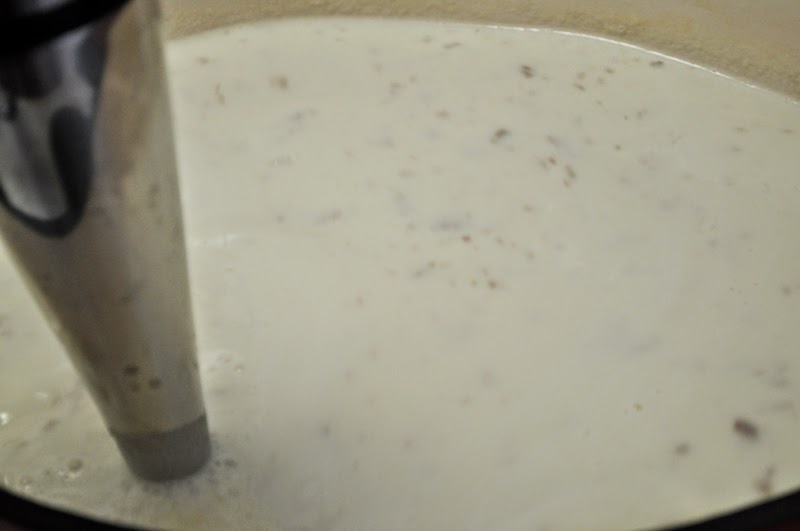 At this point, if you have an immersion blender, go ahead and blend it until it's nice and smooth. If you don't, do so manually using your potato masher.

Another thing I love about Terri -- she was one of the people who got me my immersion blender for my birthday! 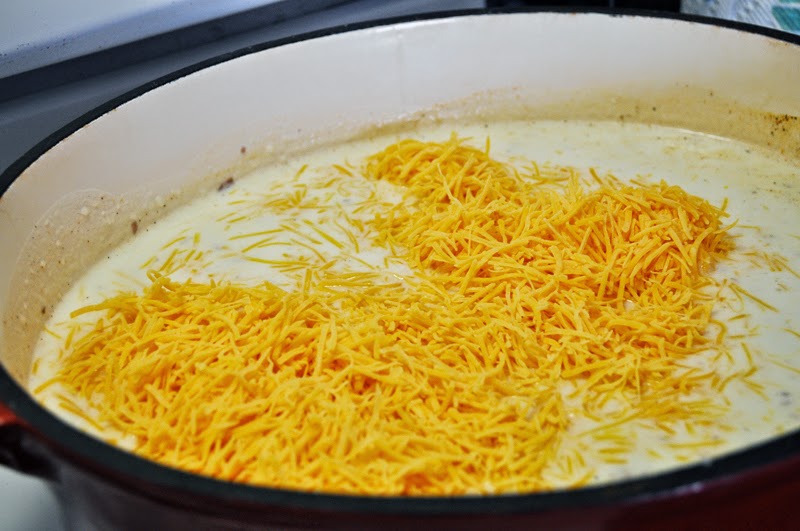 Toss in the cheese and slowly mix. Make sure the heat is on low. 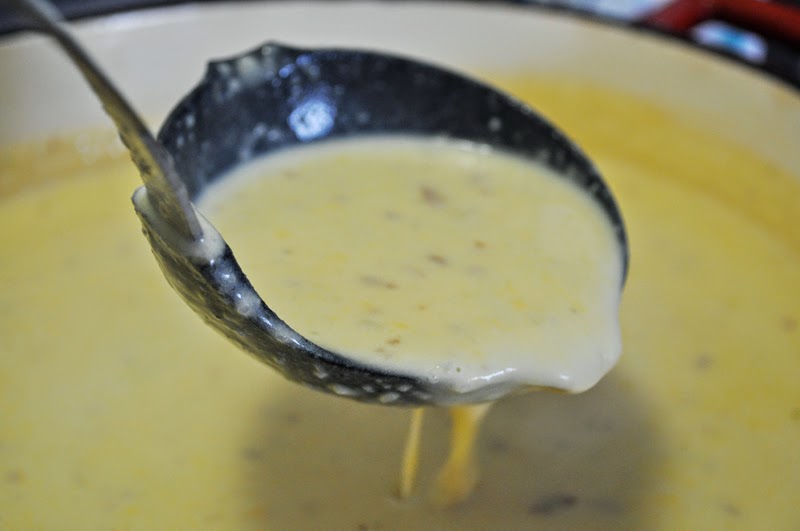 Add salt and pepper to taste.

Confession: I used some Lawry's seasoning salt and a bit of garlic salt, but I do that with just about everything.

If you need to know how many people this feeds, the answer is, give or take, a whole stinkin' army. Tim and I have been eating it for three days, and we're not even close to being done. Serve with a loaf of chewy sourdough bread, then die of happiness.