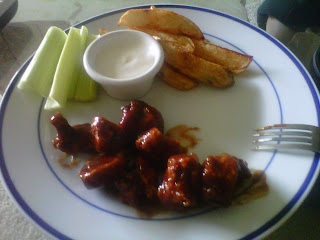 I don't like posting healthy recipes. That's not fun at all. No one wants their Saturday dinner to be a salad with no dressing and a diet coke. Not in this family. We want meat, grease, and starch. Then again, I want to be a size 2. It's a nasty cycle.

Instead of driving 25 minutes to pay $20+gas money for wings, I decided to try doing it at home. I quickly learned that the "chicken wings" you buy in the grocery store are just that...WINGS. Gross.

I can't deal with this. It makes me want to vomit. So, I threw them away (my husband doesn't understand my issue with this), and decided to make BONELESS buffalo wings. Honestly, it was just as good as any wings place (and I'm not just saying that). So, here it goes! We'll start with the french fries.

French fries
Ingredients:
Directions:
Ok, now it's time for the chicken. Don't be afraid-this is not scary or difficult.

Buffalo wings
Ingredients (for 2 people):
Directions:
This is where it gets really difficult. There are times in your life when you have to make huge decisions: where you'll go to college, who you'll marry, how many kids you'll have...and this is one of those moments.... 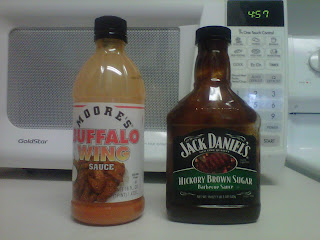 I chose buffalo, and Tim chose barbecue. Once the chicken is cooked in the oil, drop them into the sauce of your choice and let them roll around. They don't have to sit in there long-just make sure they're thoroughly covered and they're ready to serve.

So that's it, folks! Trust me, it sounds much more complicated than it is. I'd like to credit my husband for taking these amazing pictures with his amazing blackberry. I'm no photographer.

A few notes: The Pioneer Woman, who I love, makes homemade ranch and wing sauce.  I wish I were that handy, but unfortunately, I am not. I did, however, serve this with real, authentic celery sticks.
Newer Post Older Post Home
Content Copyright © 2009 by Rachael Wadsworth and All Kinds of Yumm. All rights reserved. Click here to read our Privacy Policy.