...is through the food from this blog.

You think I'm kidding. Do you think it was my whit and good looks that stole Tim's heart? Wrong. I'm pretty sure it was our very first Valentine's Day when I actually made an effort to cook.

We all start somewhere in the kitchen. My mother tried tirelessly to convince me to cook when I was growing up, but I was too busy doing stuff that was going to be useful for my life in the "real world."

And learning how to speak backwards.

Since no one got on board with my new universal language, and because my father was the only person who wanted me to join the WNBA, I changed my goals. On our first Valentine's Day together in 2007, I thought I'd try to cook Tim a real meal. One of my girlfriends was kind enough to let me borrow her kitchen for the evening, and I was ready to blow his mind (in a purely culinary sense). 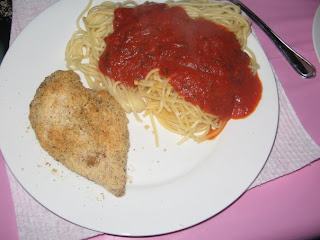 I went above and beyond anyone's expectations. I made chicken....and pasta. 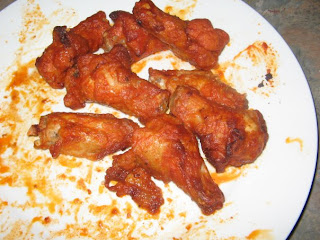 I even served microwaved buffalo wings as an appetizer. Are you convinced yet that even you could start a food blog? 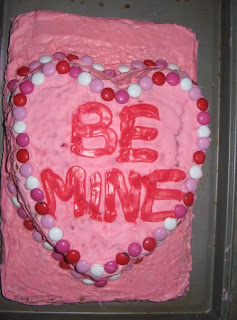 I think what really topped it all off was the cake. This took me hours to make.

Excuse me while I drop to my knees and thank God that this man ever put a ring on my finger, solidifying that I would cook most of his meals for the rest of his life.

Did I mention I lit the tablecloth on fire? 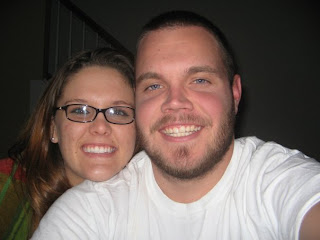 Ahhh, but we were happy and in love. And compared to the cardboard pizza and wet eggs we ate at the ROT, it was a feast.

While learning how to cook is an admirable feat, it poses some future problems. Have you ever heard the argument against getting your significant other an incredible birthday/anniversary/Christmas/Valentine's Day gift?


"They're going to expect something even better than that next year."
I get it now. Every year I have to do something bigger and better. And is there anything less romantic than a Valentines Day that falls on a Monday? That's about as exciting as taking the SAT's on your birthday.

Been there, done that.

I'm still going to share with you my top ideas for romantic recipes. These are all meals that I've previously blogged about, but they are definite winners on any romantic occasion. While I know the majority of people will go out and spend an exorbitant amount of money on a mediocre steak, I also know there are some people (like me) who prefer to celebrate in my own home.

Romantic Dinner Idea #2: Chicken alfredo. Once again, a pretty simple dinner, but one of the most popular ones.

Romantic Dinner Idea #3: Filet mignon and crash potatoes. This is G-O-O-D, and believe it or not, it's very affordable. I typically use Ledbetter bacon wrapped beef tenderloin filet (at Walmart), and it's less than $5 for 2 filets. And on Valentines, I like to pull out the big guns and make red garlic mashed potatoes instead of the crash potatoes. Serve it with steamed asparagus or green beans, and you just saved yourself $50 at some fancy schmancy restaurant, PLUS you can wear your PJ's to the table.


Romantic Dinner Idea #4: Spinach stuffed shells. What is it about Italian food that's so romantic? Am I the only person who can barely move after I eat it? I guess I'm just missing the "sexy" factor in it. Please enlighten me, readers.


Romantic Dinner Idea #5: Finger foods! This is one of my favorite blogs I've ever written. So often I got caught up in finding the perfect meal, only to realize that there's no reason not have a taste of it all! I highly suggest this approach for a more casual, laid back Valentines evening. Not that I have children or anything (sorry, Mom), but most of these foods are kid-friendly and would definitely please the masses.

Now on to the good stuff: dessert. Most of you aren't bound by the laws of boot camp as my husband is, which still enslave me. So I want you to choose one of these desserts and go for it. And think of me while you enjoy it.

Dessert Idea #1: Chocolate bundt cake with glaze. This isn't an "in your face" type of dessert. It's more sophisticated and grown up. So, nothing like me. But maybe it suits you.

Dessert Idea #3: Classic pound cake.This may sound boring, but there are a million things you can do with pound cake: top it with frosting, add it to a bowl of ice cream, cover it with chocolate sauce or add strawberries and whipped cream. See? Definitely not boring.

Dessert Idea #4: A chocolately, cloudy miracle. I honestly can't remember where the idea for this came up, but thank goodness it did.

Dessert Idea #5: Dark Chocolate Double Chunk Cookies. Is dark chocolate an aphrodisiac? If so, bake this with caution. I do not want to be blamed for any unplanned children.

Well, folks, I've taken you as far as I can. The rest is up to you. Just remember: restaurants are great and all, but coking at home is much more intimate and inexpensive.